This year Saturday Night Live celebrates its 40th anniversary on the air. Pretty incredible, really. I never thought about how many lives this show touched, how many careers it sparked, and how much work actually went into these skits until Sunday, when NBC aired a 40th anniversary special for the show.

I think every kid had that period of time, when you were old enough to stay up past midnight on a Saturday, but too young to have any cool plans or a curfew that would allow you to be out at that hour. So, we watched Saturday Night Live, and we felt so badass about it. This is where I first saw Tina Fey.

I just finished reading her bestseller, Bossypants, in record time (ok, so it took me a month. Whatever, when was the last time YOU read an entire book?). Honestly, for someone (me) who doesn’t really understand the recent rise in female comedian memoirs (Not That Kind of Girl, Yes Please…) I can tell you this one was a great read. It was funny, it was purposeful, it was witty, it was informative, and even empowering. I was probably so into it because, in a way, I grew up with Tina Fey, from her time on SNL and Weekend Update to Mean Girls (which I saw, like, 3 separate times in the theaters), to 30 Rock, she was present during a very influential time in my life.

Anyway, while this book is hilarious, and I think you should read it RIGHT NOW, and probably put her on a presidential ballot ASAP, one part of the book was too good not to share—her take on retouching images using Photoshop:

“I feel about Photoshop the way some people feel about abortion. It is appalling and a tragic reflection on the moral decay of our society… unless I need it, in which case, everybody be cool.” 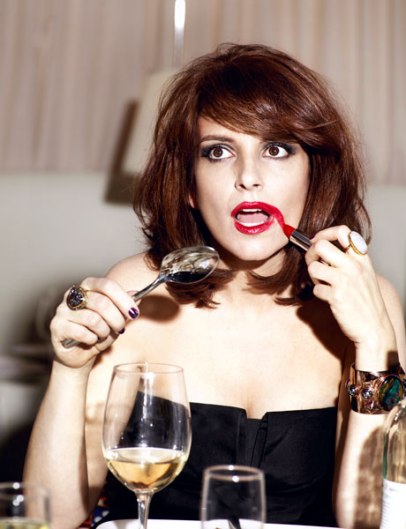 In this society, we think it’s awesome to point out celebrities’ treacherous Photoshop fails. If I were these people, I’d post the shit outta my Photoshopped picture on Instagram with a caption saying, “WHY ARE YOU ALL SO OBSESSED WITH ME?!” This, ladies and gentlemen, is why I am not famous. But, as Tina Fey points out, “only people over seventy are fooled by Photoshop.” You know it’s happening, you know these people on the magazine covers don’t ACTUALLY look like that. Let’s be real, people (ha ha, no pun intended there, but that was kind of funny).

“’Why can’t we accept the human form as it is?’ screams no one. I don’t know why, but we never have. That’s why people wore corsets and neck stretchers and powdered wigs.” This is probably the most valid point in favor of Photoshop that I’ve ever heard. I’d take a little retouching on my hips over squeezing into a damn corset ANY day. As women, we have taken steps to change our outward appearance since the dawn of time. Photoshop is just another logical progression of that.

A final thought from Tina Fey, my new favorite human being ever, to leave you with:

“Give it up. Retouching is here to stay. Technology doesn’t move backward. No society has ever de-industrialized. Which is why we’ll never turn back from Photoshop – and why the economic collapse of China is going to be the death of us all. Never mind that. Let’s keep being up in arms about this Photoshop business!”