So you might recall a post I did last year about my newest skin obsession, rosehip oil. I still use it on a daily basis and am still reaping the benefits of elasticity and much-needed moisture to my face. I’ll admit, though, I’ve still been experiencing breakouts… to the point where I actually went out and bought some salicylic acid spot treatment. Yeah… no one ever mentioned your mid-twenties would be spent battling both acne and wrinkles. Ugh. Anyway. It hasn’t been ideal.

Flash forward to a few weeks ago, my mom started going on and on about some wipes she found in the store that she swears by; something she called witch hazel. 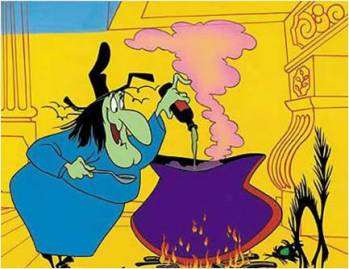 Um. What? When I think of witch hazel, I think of that character on Looney Toons. I honestly thought witch hazel was like a weird name for a supplement, like St. John’s Wort. And let’s just say my mom believes anything Dr. Oz tells her, even after he got sued for giving people false information. Like a ton of times. All that taken into consideration, I did some research, asked around, tried it out for myself… now I can confidently say that after three weeks of use, this shit should be sold by the ton.

Witch hazel is a plant. Easy enough. The leaves, bark, and twigs of this plant are used to produce an astringent that can be used for various medicinal purposes. The essential oil is not sold separately as a consumer product, simply because the plant does not produce enough essential oil to make that production viable. Most witch hazel that is on the shelves is distilled with either water or alcohol, depending on the use you want out of it. From what I’ve read, if you get it in liquid form as witch hazel water, that is more for ingesting, and anything distilled with alcohol is used either as a liquid or wet wipe as an astringent centered around skin care.

Let me preface this by saying my research only goes as far as uses for these astringent towelettes.

First and foremost, it is used as a natural astringent. It has the ability to remove excess oil from the skin and to minimize the appearance of pores. This aids in treating and preventing blemishes and acne from forming. I have been using the Dickinson’s wipes every night after removing my makeup and have realized my pores (which are normally huge) have noticeably shrunk down. My make up looks better and better sitting on my skin every day, and even when I go makeup free, I don’t worry as much. Stress and premenstrual break outs are not nearly what they were a month ago.

It also has  skin-tightening  properties and can help reduce swelling on the skin. This makes it ideal for brightening and firming the skin around your eyes, shrinking swollen/varicose veins, minimizing the appearance of bruises, and even relieves hemorrhoid pain. I’ve read that it is like “nature’s Neosporin,” so it can be applied to minor cuts and scrapes to disinfect, stop bleeding, and help the healing process.

As if that wasn’t enough, this stuff is the best after-sun treatment I’ve ever used. Never mind those expensive aloe- and cucumber-based lotions… there is aloe added into the wipes that I buy, but even the all-natural aloe gel I have never gave me these kind of results. After spending hours in the sun one lazy Saturday, I applied it to the redness on my nose and on my thighs where I got more sun than intended. It immediately took the burning sensation and tenderness out, and by the end of the night most of the redness was gone! I woke up the next morning feeling fine. I think this particular experience caused me to be a true believer in this shit.

And there are still more uses! I’ve also read it can relieve the itch from insect bites–though, I still have not tested out this theory yet (only because my Skin So Soft works so well I haven’t really gotten bit much this summer, thankfully). My coworker said when she was younger, that’s what her mom used to use on her for mosquito bites. Another use is razor burn and skin irritation, which I have tested, and it definitely helped in the bikini area. Not any more than using Listerine though (astringent hack, btw). WedMD says that it is “possibly ineffective” for treatment of itchy and inflamed skin (i.e., eczema or similar rash), and hydro-cortisone seems to be a better option. But either way, I’m convinced this stuff is a god-send. Like, why don’t more people know about it?

Is there a downside to this magnificent product?

The only con I’ve found thus far is the smell of the towelettes I use. The “signature botanical scent” they mention on the packaging doesn’t really do it for me.

And honestly, with all these benefits, if that is my only complaint… why are you still reading this? Go to the store and get some!