I understand that football is a male-dominated arena, both on and off the field. I get that my interest in it is strange to some people; others may think I am feigning an interest to impress. But I grew up watching it. I didn’t really show much interest in it until I started working for my college football team, but now I love learning about the game, the players, the politics, and the off-season goings on. So I say this, from a female’s perspective, from the perspective of someone who enjoys the game… the NFL really needs to take a moment and reflect on the message they are sending to men and women regarding abuse. Just because it is a male-dominated institution does not mean that it should perpetuate any form of physical, emotional, verbal, mental, or sexual abuse.

Running back for the Baltimore Ravens, Ray Rice, was arrested and charged with simple assault-domestic violence this past February for striking his then-fiancée, Janay Palmer, in a hotel in Atlantic City. Shortly after, a video surfaced on TMZ of him dragging his (seemingly unconscious) fiancée out of the hotel elevator (supposedly right after the altercation). Rice plead not guilty to third-degree aggravated assault, and escaped jail time for the incident. He married his fiancée one day after his trial. Despite him getting off seemingly scot-free (he was accepted into a counseling program as part of his plea deal), he was still expected to face punishment in terms of fines and suspension under the NFL’s personal conduct policy.

Let’s not forget about the press conference held in May, either, where his wife apologizes for “the role that [she] played in the incident that night.”

When all is said and done, Rice is only facing a fine and 2-game suspension from the NFL. As a female, I’m angry. As a female who thoroughly has a passion and interest in the NFL and football, I’m furious.

“First-time offenders, like Rice, typically are suspended a month or less by the league. In the past three years, only 12 players received more than four-game suspensions, and all were repeat offenders.”

Is this the message we want to send to abusers? Is this really holding NFL players to a so-called “higher standard?” WTF is the NFL smoking?

Obviously not pot, because that would get you suspended for an entire year. 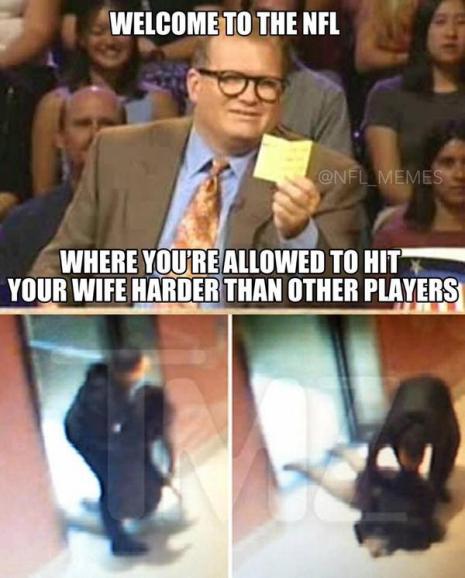